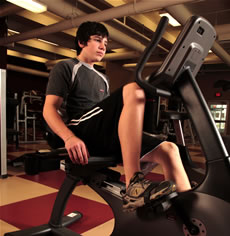 Marc Straniere hit the ground hard as he was tackled during a pre-season football practice. It was not a gentle fall, and his first thought was of his thumb, which had been momentarily caught in a defender's face mask. "I thought it was broken," said Marc. Then he rolled over, and something else got his attention - something potentially much more serious. His left leg felt dead.

Andi Lucas, Laurel Health System Athletic Trainer, ran to the scene and saw immediately that Marc had broken his femur (thigh bone). She made a 911 call for an ambulance, and within minutes Marc was being rushed to Soldiers + Sailors Memorial Hospital Emergency Room. The accident ended Marc's football plans for that fall. But with the help of the Laurel Health System Sports Medicine Team, he's on his way back to athletic competition.

Marc was examined and x-rayed in the emergency room, then sent immediately to the operating room where orthopedic surgeon Dr. Donald Golobek repaired the break by inserting two long rods into the bone. The rods kept Marc's leg stable, allowing the bone to heal. "The whole hospital experience was wonderful," said Marc's mother, Krista, a nurse in the SSMH Emergency Room. "I'm not saying that because I work here. I never had a family member in the hospital, but everyone, even the cafeteria staff, were fabulous."

Marc returned to school in a wheelchair, but after two weeks switched to crutches, then weaned down to one crutch. By mid-November, he was walking on his own. Dr. Golobek removed the rods on November 28, and Marc began rehabilitation with another member of Laurel's Sports Medicine Team, physical therapist Marc Riley. Evaluations were performed to identify areas of dysfunction, and a treatment plan was designed to address each problem area. First was his gait. "I was limping," says Marc, "but didn't notice it until the first day in therapy. The therapist had me stand in front of a mirror and watch myself walk. I was really leaning to the left."

Therapy visits started at three times per week, concentrating on normalizing Marc's gait and restoring strength and balance deficits identified by Marc Riley. The therapy went well; in fact, as of February, he had progressed enough to begin the transition from physical therapy to workouts with Athletic Trainer Andi Lucas. Andi is continuing the process of helping Marc rebuild strength and restore the higher-level functions necessary for a return to sports. "Marc is doing really well, " says Andi. "I see him three to five times a week, and he is progressing nicely." Marc should be able to return to track and field or baseball next spring and maybe snowboarding this winter. "My leg is improving. I will come back 100%," Marc says. "I will be able to play football next year - definitely!"

Reprinted, with permission, from the Spring 2007 Edition of The Laurel Community Newsletter.