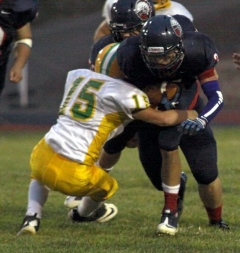 SAYRE - Call it what you want but Friday night Sayre's offensive attack was effective, pounding out 364 yards on the ground in a 41-21 win NTL Small School football win over Wyalusing at the Lockhart Street Bowl.

Hanafin gave credit to his coaching staff for their in-game adjustments.

"I have to credit coach (R.C.) Nobles, coach (Derek) Watkins and Jason Villanti. They communicate with each other very well.

"A lot of times, we're just changing a simple blocking scheme or we're moving the hole one hole over and we're able to be successful," he said.

"And, the players are patient and they're playing for each other," Hanafin added.

The Redskin defense came up with the first big play of the night when Post picked off an Andrew Pickett pass at the Sayre 49 on the second play of the game.

Two plays later, Bodolus busted up the middle, broke a couple of tackles and scampered 50 yards for a touchdown.

"It was a nice way to start the game," said Hanafin.

Midway through the second quarter, with the Redskins on the move, Post turned what could have been disaster into a 45-yard touchdown run.

On a first-down play, the snap rolled through quarterback Derrik Keir's leg into the backfield, where Post first booted it, then scooped it up. He beat the Wyalusing defense to the corner and raced 45 yards down the sideline to paydirt. J.P. Harbst's PAT kick - his second of five on the night ­- gave Sayre a 14-0 lead with 6:06 left in the first half.

Hanafin was glad to see a bounce go his way.

"In the past, we've had bounces go away from us," he said. "Kyle Post was 'Johnny-on-the-spot' and great players make great plays and I think that play was a testament to that."

The Rams answered with a 10-play, 75-yard scoring drive, which included a personal foul call against Sayre, to cut the deficit to 14-7 with 2:03 remaining in the half. Dylan Otis capped the drive with a 10-yard touchdown run.

Post returned the ensuing kickoff 37 yards to the Wyalusing 48, giving the Redskins a chance to add another score before the half.

Two plays later, on third-and-7, Bodolus busted through the interior of the Wyalusing defense and rambled 21 yards to the Ram 24.

After a face-mask call moved the ball to the 10 on the next play, Jeremy Kyc swept around left end for a touchdown to put Sayre up 21-7 with 42 seconds remaining in the half.

The Redskins then dealt the Rams a fatal blow with a 13-play, 64-yard drive that chewed 6:35 off the clock to open the second half.

Bodolus, who carried the ball seven times for 44 yards in the drive, finished it off with a seven-yard TD run to give Sayre a 28-7 lead.

Wyalusing answered quickly with a five-play, 64-yard drive that culminated with a three-yard touchdown run by Otis. A pass from Luke Jennings to Tim Ace, who had runs of 27 and 16 yards on the scoring drive, for the two-point conversion cut the Ram deficit to 28-15 with 2:31 remaining in the third quarter.

Sayre's next drive ended with a punt, giving Wyalusing new life, but Kyc recorded back-to-back sacks, the second causing a fumble that David Bidlack recovered on the Ram 15.

Bodolus tacked on a 45-yard touchdown run with seven minutes left in the game to push Sayre's lead to 41-15.

Wyalusing's final score came on a 13-yard pass from Justin Haley to Tyler Fenton with 4:16 left in the game.

The Redskin defense, which forced four turnovers in the game, did its job, said Hanafin.

"Coming into the game, we thought (Wyalusing) was going to throw the ball because they did last week, so we wanted to take away the pass.

"We did that, then they started pounding us," said Hanafin. "But we were up by 14 points, so we figured we'd stay in the defense and make them earn it. They did earn it, they pounded the ball right down our throat.

"Then (secondary coach) Tom Meyers made an adjustment in the secondary and after that we were able to better counter the motion man because that's what was killing us," added Hanafin.

Sayre is back in action next Friday when it hosts Troy, while Wyalusing travels to Bucktail.