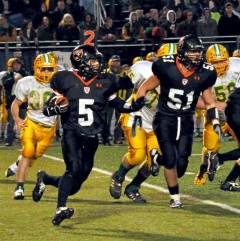 TOWANDA - For the first time in a long time, neither Wyalusing nor Towanda are headed for the post season. Nevertheless, both teams played hard in the annual rivalry for the Bronze Helmet. The Black Knights would come out on top, defeating the opposing Rams 42-7.

It was a night for the seniors to shine, as four of the five touchdowns on the night were scored by seniors while the senior led defense held Wyalusing to 99 yards total on the night. Towanda senior wide out/defensive back Brandon Dinelli opened the action with an interception and the first two touchdowns on the night. An Andrew Pickett interception set the Knights up at the Wyalusing 46. Nine plays later, Dinelli would run it in two yards for the score. Kicker Nick Place's PAT was good, and with 7:32 to play in the first, Towanda led 7-0.

On Wyalusing's first four play drive, Tyler Fenton would give them their first punt of the night, handing the ball right back over to the Knights at their own 47. Coach Wecker honored senior Trey Sites' dedication to the team by letting him start the second series at QB and throw a deep pass, which fell incomplete. A run from Dan Leljedal and another incomplete pass, this one from Noah Huff, set Towanda up midfield on fourth and seven. Nolan Clark would give the Knights their first punt of the night, giving the Rams the ball on their own 14 yard line.

Yet again, Fenton would punt for the Rams, and the Black Knights would have the ball at their own 45. On first and ten, Huff would hand off to Dinelli, who would race 55 yards into the end zone for the touchdown with 1:53 left in the first. Place's extra point was again true, and the Knights now held the lead, 14-0.

On Wyalusing's ensuing drive, Fenton would punt for the third time, giving Towanda the ball yet again. The Black Knights' 12 play drive would be stalled and stopped short on fourth and three, giving Wyalusing the ball, and Fenton would punt once again.

On first and 10, quarterback Noah Huff would throw his first pick of the night, the ball being caught by opposing QB Andrew Pickett. This set the Rams up at their own 35, where Pickett would fake out the Towanda defense and cross the goal line for the score with nine ticks of the clock left. Dylan Otis' PAT was true, and the Knights' lead was cut, 14-7 to end the first half.

Justin Hunsinger would start the Knight scoring in the second half, as he plunged in from three yards out on the opening drive of the third quarter. Nick place added the extra point, and at 9:26 in the third, Towanda led 21-7.

Senior Trey Sites had a chance to shine on the next series returning a tipped pass 25 yards down the right sideline for the score. Place again added the extra point, and the lead was now 28-7 with 8:30 left in the third quarter. Following another Ram punt, Towanda would add to their lead as Leljedal would take a sweep around the left end, breaking three tackles en route to a 24-yard touchdown run. Place's fifth PAT did not fail to make the cut, and the Black Knights now led 35-7 with 3:43 left.

Towanda's final score of the night came on their next possession as senior Joel Miller hauled in a perfect pass from Noah Huff and outraced the Wyalusing defender for the 44 yard score. Nick Place's extra point was true, and the final score was set, 42-7.

Brandon Dinelli led all rushers with 135 yards on 12 carries and two scores. Noah Huff added 78 yards on 11 carries for Towanda, while Justin Hunsinger tallied 53 yards on 13 carries and a score. For Wyalusing, Andrew Pickett was 7 for 16 passing for 68 yards.

Towanda ends their season 3-7 while Wyalusing dropped to 1-9.